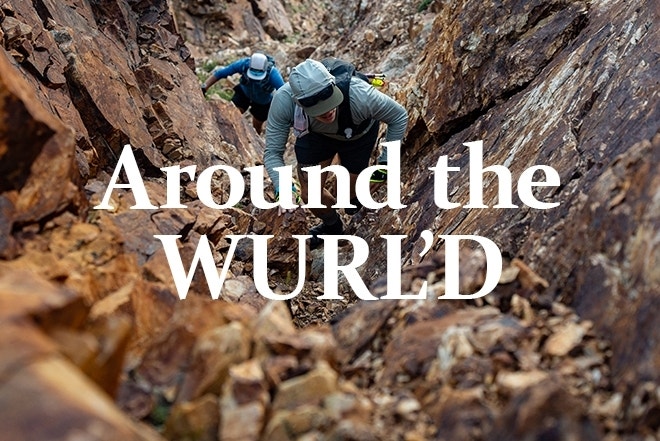 Chris Fisher is no stranger to hard, back-breaking endurance events on foot. After quitting during ‘Hell Week’, an infamous final component of Navy Seals training, Chris was left with regret.

He harnessed his regret and decided to find out what he was truly made of by breaking into the world of competitive ultrarunning, and mountain link-ups. Eventually Chris quit his job to become a full-time athlete, going 100% into his own story of doing ‘hard s**t’ in the mountains.

Shorty after an early attempt on the Mosquito-Tenmile traverse in Frisco, CO., Chris set his sights on his next big send.

The WURL is a 36 mile route, in the Wasatch mountain range, USA, with a lot of exposed ridge traversing. This sounded like fun to Chris, who revels in the suffer. The route was originally envisioned and brought to life by Jared Campbell, back in 2000.

Chris circulated the idea of running this route with friends, before Jason Hardrath, known as the king of FKT’s (Fastest Known Times) and no stranger to suffering, reached out. It was then, that both Jason, and Chris knew they had to attempt the WURL.

Chris and Jason made their way to Wasatch on August 5th. The limited weather window left them with a start on the 8th. Usually, routes like this are scouted ahead of time to scope out any technical sections and navigational difficulties. It’s typical that even experienced ultrarunners will spend multiple days climbing sections of the route, according to the Salt Lake County SAR. Yet with storms on the way, they decided to send the route relying only on their confident route-finding skills, and knowledge of the mountains.

Having a tight support crew is essential on big sends like WURL. Chris and Jason tapped into the local trail community and found their people who would support their challenge. “The role these amazing humans played in this effort was crucial and it was incredible that so many people volunteered to help any way they could with such short notice,” Chris says.

The support crew consisted of ‘Crew Chief’ Joe Maio, a ‘true leader’, whose organisation and planning helped Chris and Jason to focus on getting their heads in the right space, and their nutrition ‘locked in’ for the challenge.

Team members Otto Solbertg and Travis Suite selflessly carried up their fuel caches. Meanwhile Anna Demonte, also a seasoned runner, paced with Chris and Jason through the night, fuelled by her love for the mountains, and her previous successful send of the WURL.

Chris completed his first WURL in 32 hours of consistent movement.

Yet, one lap of the WURL wasn’t enough to satisfy Chris. He wanted to turn around and run the route in reverse.

Jason opted out of the second attempt, as his pace had dropped, and he wanted to give the team a better chance of ‘keeping the dream alive’. His body wasn’t recovering from his prior California epic, over 7 days, taking on two separate FKT’s in one push – the Norman’s 13, and Human powered 14ers.

For big mountain routes like the WURL, running with others is an essential way to push through the pain and technical challenges. Yet without Jason, Chris was alone.

He reached out to Brian DeYoung, local artist and ultrarunner, who had just completed the Cottonwood Traverse the day prior. After some hesitation, Brian decided to join Chris, pacing him through the first sections of the second round of WURL.

10 hours of struggling through the intense heat of the day with a few shaded breaks and running to Led Zeppelin, Brian left Chris at the Pfiefferhorn where Dub Price was waiting to pace with Chris.

On the night section Chris’ headtorch died, leaving them both navigating difficult terrain with only one lamp. Support crew member Zach Terry met Chris with Wendy’s burgers, fries, and nuggets, and paced with Chris and Dub through Catherine’s Pass to meet the 3rd sunrise of the journey, before parting ways around 5am.

Jason re-joined Chris for the final stretches. Chris explains, “After doing 1 WURL with me, he made the decision to come lead through the final stretch of the second WURL. How many humans would willingly suffer with another fellow human, drop out to give their team a chance, and then hop back in to finish this journey strong despite all the pain? Not many. At one point during this stretch, he looked at me in the eyes and said, ‘you’re feeling exactly how you’re supposed to, let’s keep moving’.”

By this point Chris was in pain. He had been awake for 60+ hours, while continuously moving in the mountains. He was suffering, yet doing exactly what he loved to do, with each step of pain moving him closer to the finish.

Chris holds the belief that these feelings are just obstacles for him to hurdle, and describes his suffering on WURL as “a beautiful remarkable suffer” that was new to him.

Chris reached the finish line in 66 hours and 48 minutes. He says, “With a handful of 7-minute naps, support from local crushers and the mindset of accomplishing something bigger than I’ve ever done before, the dream became a reality. This effort ended up being 3x my largest effort to date. My time was not super speedy by any means, but I was the first and I was able to set the bar for future WURL’d goers. I think the right person can break 48 hours.”

Chris continues, “Throughout the time I spent on route I learned a lot about myself. I know how to dig deep when the going gets hard, how to really flip that mental switch. I also affirmed with myself that I am built for massive pushes throughout the mountains. I’ve known for some time that these challenges are where my passion lives and breathes, and I was able to finally bring that to life. My love for the mountains never bores and I’m always looking forward to the next adventure. I have many more ‘Grand Adventures’ on my list of things to do and I’m excited to have the opportunity to express my passion in a unique manner.

“I learned more from Jason in the past week of deep conversation and sharing many hours on mountains than I have from most people in my life. His wisdom has helped me put clarity behind a lot of my jumbled-up thoughts, how to interact with a fellow human in a more positive way that would potentially inspire deeper, how to dig deep and maneuver the dark passages of the mind, how to truly embrace the journey for what it is. That journey including the part after the actual effort, where we can bring the gold back to the village.

“With all of that said. Onward! As my good friend Jason says, ‘Aiming high and lifting others!’.”

Chris Fisher is a mountain athlete from the flatlands of Dallas, Texas. Throughout his childhood he was fortunate enough to go on family ski trips to Colorado. Ever since his first time in the mountains, he knew he would one day call them home. He spent some time in the US Navy in pursuit of becoming a Navy Seal, but his attempt ended during hell week when he rang the bell. That shifted his perspective on challenge, and he began pushing both his physical and mental limits in the mountains of Colorado.