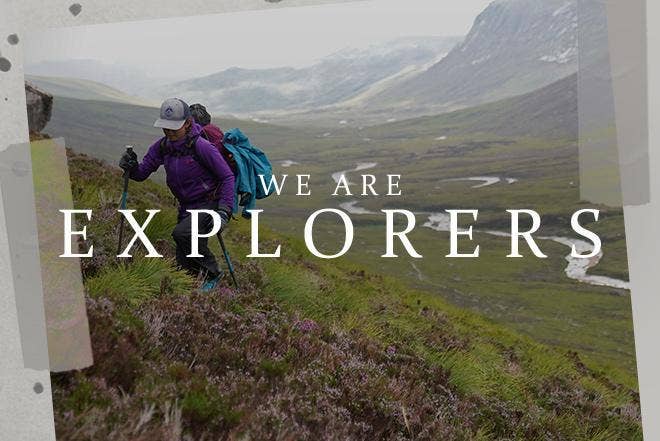 The Cuillin Ridge on the Isle of Skye strikes fear into the hearts of many would-be Munroists, and I was certainly amongst them. The infamous Inaccessible Pinnacle (the ‘Inn Pin’) is the only Munro which requires the use of a rope and, although not a particularly challenging rock climb per se, it is certainly outside the comfort zone of many hill-walkers. Whilst the climbing is not super technical, as with many other parts of the Cuillin Ridge, dealing with the exposure is the real test and it is easy to see how the consequences of a mistake could well be fatal. The Ridge provided real cause for concern for me, given I was normally alone: how would I deal with it?

My fellow British Adventure Collective teammates Ed and Aaron came up to Skye on the agreed weekend and we planned to do the Cuillin Ridge traverse, bagging all 11 Munros that make up the Black Cuilllins. However, as is so common on Skye, the Weather Gods had other ideas and when we set off on the Saturday afternoon, we traipsed up into a wet cloud, with the hope it would lift, as per the forecast. After bagging the two most southerly Munros on the ridge in driech* conditions, we settled in for a cold and damp night’s bivvy high on the ridge, still optimistic that the cloud may lift come morning. We were up with the dawn, but the sun was nowhere to be seen as the Cuillins were still completely clagged in. The rock was wet and the sheer drops seemed endless, shrouded in cloud as they were. Route-finding was very tricky and we bailed on the ridge, after bagging just two Munros, frustratingly emerging below the cloud into the sunshine. It turned into a beautiful day and as Ed drove off the island he said he could finally see the Cuillins coming out from below the clouds.

Subsequently, I was blessed with a spell of settled weather as I tackled the remainder of the ridge over a number of days, fully able to appreciate the beauty of Skye and the grippiness of the dry gabbro rock. I went with a climbing guide for the day that included the Inn Pin and it was a rare treat to have assistance and leadership in route-finding from John Smith of Skye Adventure who knew the ridge like the back of his hand, allowing me to relax and enjoy the most amazing day.

I left Skye with dreams of a return for a complete Cuillin Ridge Traverse, along with sore cheek muscles from all the smiling at just how amazing the views had been. I finally understood the hype of Skye, although I realise I have probably used my life’s supply of good weather days on the island already. There were many other clear days throughout Project 282 when I would be standing atop a summit looking at the other peaks I had already visited and the others that remained for me to climb. If there was cloud sitting on any Munros I could see, you could guarantee the Skye Cuillins would be covered, making me feel even more appreciative to have had such a spell of good weather when I was there.

Desperate to finish for my friend’s wedding and to get out of the autumnal stormy conditions, the final push to make my finish date on Ben Lomond was really tough. I set the date three weeks out, when I had climbed 216/282 Munros. I spent a long morning poring over maps, route-planning a lot of big hill days to get to the end and then went out to climb four Munros, finishing on what is possibly Scotland’s most iconic mountain: the pyramidal peak of Stob Dearg on Buachaille Etive Mor, which guards Glencoe as you drive along the A82 towards Fort William. However, the “shower” that started when I left my bike was still firmly on downpour mode 7 hours later when I got to the top of the final Munro of the day in the dark. I had intended to cycle into Glen Etive before camping that night, but by the time I got my bike unlocked I had foolishly let my hands get so cold I couldn’t get them back into my gloves: my fingers had seemingly transformed into claws and I struggled to use my brakes. Not an ideal situation when cycling on a busy road in the dark and rain! I called it then and ended up pitching my tent in a layby for a rather restless night’s sleep, frequently disturbed by lorries whooshing past mere metres outside my tent.

Happily, when I unzipped the tent the next morning, I was greeted with clear, blue skies and the famous “Bookle” standing tall and proud. What a change from the night before! I pedalled down Glen Etive feeling buoyed up and positive about the big days that lay between me and the end. The sunshine helped keep my spirits up, even when I found myself backtracking for what felt like the umpteenth time on my way up my second Munro that day, Beinn Fhionnlaidh, trying to find my route up amongst seemingly impassable small cliffs and rock terraces, trying to keep a cool head when relying on too many tenuous grassy holds and scrambling on wet rock over steep drops. Needless to say, I was relieved to make the top and return to my bike by a less technical route. It was dark and cold as I cycled back up the glen to my tent, but the night skies were so clear and the mountains were silhouetted by the stars shining bright, with the Milky Way streaked across the sky. That was my last full day of good weather.

The next few weeks passed in a blur of wind, rain and constant fatigue. This was another level from what I had experienced so far and I frequently found myself on the verge of tears. The closest I came to quitting was on the day after finishing the Glen Etive Munros, having had a completely miserable day trudging in the rain and wind across pathless ground with grasses and ferns so tall they tickled my nose (alright, I’ll admit, that’s not actually all that tall, but it’s still not pleasant!) to the outlying Beinn Sguilard, before cycling back in the pouring rain to my tent. After eating all my remaining food supplies, I crawled into my sleeping bag, grateful to be out of the rain. When it was still hammering it down the next morning, as I got up and put on my wet waterproofs and took down my wet tent, I had to keep a bit of a sense of humour. That was my low point. Had someone arrived with a car and told me I could get in it and it would all be over, I probably would have jumped at the opportunity! Instead, my only option was to load up my bike and get going. It stopped raining as I cycled across Rannoch Moor and I took a hit on my credit card, checking into the Bridge of Orchy hotel and hanging up all my wet gear, before getting back on the proverbial horse and bagging the four Munros forming The Black Mount, with the thought of a hot shower, dinner that wasn’t Super Noodles and a comfy bed spurring me on.

I have never felt as run down as in the final weeks and there was a physical manifestation of this as I developed a nasty infection in my finger which my body was too tired to fight off. Thankfully, a doctor friend I made on the hills in the Far North who climbed five Munros with me in the first month, had decided to come and join for a day climbing the seven Munros that make up the Ben Lawers group. Andrew diagnosed the infection as acute paronychia and told me I would need antibiotics to treat it. For those who like the technical terms, it then also became macerated and I had desquamation of the skin. In English, it looked really gross and also hurt a lot! The antibiotics did their job though and I can confirm I still have all digits intact.

In the last week, I still had a long way to go… I climbed 28 Munros, covering almost 200km on foot, climbing just over 18,000m: more than twice Everest from sea level, with another 200km on my bike to get between them. In that week I also faced winds of up to 100mph (thank you Storm Ali), snow, torrential rain and many hours of darkness. To say it was an interesting week to finish with is definitely an understatement. I paddled across Loch Lomond to Rowardennan on a stand-up paddleboard, to then be accompanied by 15 people up Ben Lomond (five of whom were people I’d met earlier in the journey). I was rather shell-shocked from exhaustion. It was pretty surreal to finally be climbing the last Munro.

*Driech: Scots word meaning bleak, miserable, dismal, cheerless, dreary. One definition I read says that it is a combination of dull, overcast, drizzly, cold, misty and miserable weather and that at least four of those adjectives must apply to use it. On that Sunday morning, as we descended from the Black Cuillins, I can assure you that they all applied. This when the rest of the UK was enjoying a heatwave and 28C temperatures!