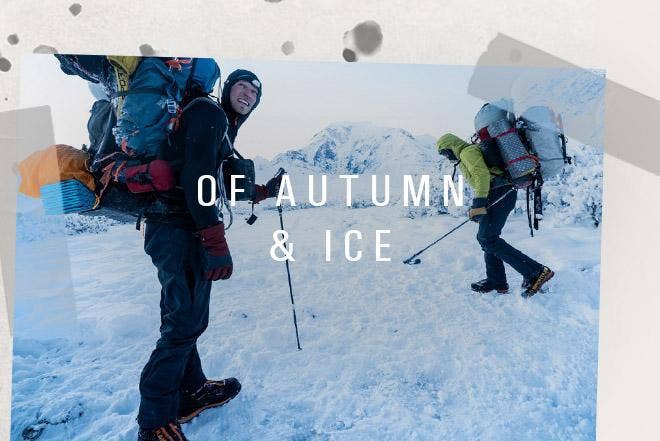 “Moose!!” I called out. No answer. They were sound asleep.

It was well past midnight. We neared the Hayes Range after a round-trip drive to Anchorage to get Austin, some twelve hours of driving. As a team of three we were headed to the North side of Mount Moffit. Just a few weeks prior we’d coordinated a similar plan and managed to climb a beautiful couloir on a peak in the same range. Climbing in autumn was a particularly interesting prospect and we continued to inquire about its ways. When we arrived at the lodge, we stepped out of the car and began a frenzy of shuffling bags into the basement. Excitement filled the lodge and Austin’s contagious energy was immediately welcomed.

At sunrise, Alex drove North to Delta Junction where he’d fly first in the two-seater bush plane. Our fourth team member was pilot Jesse Cummings. Jesse has a long beard and always arrives in his hooded cotton sweatshirt, a beanie, and a pair of hearty work pants. Bush pilots in Alaska are skilled & courageous, their service offering is second to none. Meanwhile Austin and I were sluggish and lazy. We rolled over weary from our short rest, rubbed our eyes open and hobbled upstairs for some hot coffee. The luxurious nature of the lodge was, and still is, a hilarious contrast to where we were going. The lodge is in the range itself, we were actually only 18 miles from basecamp!

“We just need to drive to the air strip, it’s a short ride.” I told Austin. I let my foot off the break, let the van roll down the 100-meter long driveway and turned right. “Okay we’re here.” I said. Austin, puzzled, replied, “Here? Like the plane lands right here?” I assured him this was the spot and not five minutes later we saw Jesse come buzzing over the foothills. Jesse came in and touched down on the grassy gravel strip right beside the highway and Austin couldn’t believe it. “He can just land right next to the road??” he asked laughing. “Yeah man - this is Alaska.” And off Austin went!

When it was my turn, we arrived at the Trident and Jesse flipped the clam-shell door open on the right side of the aircraft and we banked left into a sub-branch coming off of the North Face of Mount Moffit. Wind and cold rushed into the plane and we drove straight for the towering North Face. Sheltered in shadows, it was a big and scary place to be, especially flying straight at it in a tiny 900-pound (400kg) airplane! Now we were speeding along close to the rock-covered glacier and I leaned my head out the door to get eyes on basecamp.

I waited too long to push the bag off the wing-frame. I turned my head back to watch it. BOOM!!!

“You missed it, didn’t you?” Jesse asked laughing.
“Yep. It blew up. Those guys are not going to be happy with me.”

We both continued to laugh and banked left again to stage another round. With my hand now stiff in the cold air & holding another bag on the bars supporting the wing, the window open and the mighty power of the Alaska Range in every direction, it was certainly in the most wild moment of my life so far. Shortly before noon Jesse touched the plane down with his full-size Tundra tires. They are probably about two and a half or three feet tall (just under 1m) and on the side they say “Alaskan Bushwheel.” Badass. We’d made it baby!

We set off with light packs along the Tundra benches beside the Trident and then onto the glacier. About 3 miles (4.8km) from basecamp, we stopped for a rest and noted our last minutes feeling the rays of the sun on our faces. From now on, we’d be in the shadow of Moffit until our departure. At this time of year, the valley and its walls get zero minutes of sun and the days are shorter by more than six minutes each day. By the time we’d leave, it would be more than 45 minutes less daylight. When we arrived at our bags, it was sundown. We set up and crawled into our sleeping bags.

In the morning, we woke lazy and lethargic. Slow going to get ready, slow going to make breakfast. The area we planned to climb was a wall left of the taller proper North Face and its top was the Northeast Ridge. We found a line we hoped to climb and promptly started up it, though unfortunately it was already well past noon. We climbed till dark then decided to head back to camp and try again another day. On thin ice and compact rock, and small doubled-up V threads and short knifeblades, we rapped into the cold & dark and eventually arrived back at basecamp in the middle of the night.

Over the next two days we rested, anticipating a light storm during this time. Our basecamp was in an unbelievable location. What it lacked in comfort it certainly made up for in beauty. With no sun, life in camp was a cold and stark environment. Hoar frost began to grow on every single surface. Our tent, hardware, & equipment bags were covered in white crystals. It was rather inhospitable. About fifty feet (15m) from our tents, a small glacial pond had a frozen surface of a few inches. Learning of this pond, we started chucking rocks onto it to see how thick it was. Solid! Austin hacked out a small hole just wide enough for an upright Nalgene and now we enjoyed the luxury of having water that we didn’t need to make from snow.

Beyond camp, views of stunning mountain features surrounded us. Mount Moffit’s North Face towered over the valley, its summit 8,000 feet (2438m) above. In the centre of the face, “Entropy Wall” stood as proud as a castle. It is one of the most powerful looking walls any of us had ever seen. The mountain’s great Northeast and Northwest shoulders stood over us on each side and the imposing cirque was frozen solid. Looking west, Mount Hayes’ East Faces rose more than 6,500 feet (1981m) from the West Branch of the glacier. Mount Hayes’ twin summits were silhouetted in the evening by pink & golden light. They stuck out from the skyline like great beacons; its shadowed faces dark hues of blue and grey.

Looking North, the Trident Glacier buckled in a short icefall before dropping off out of sight below. The great tundra of Interior Alaska was off in the distance and, in its autumn form, appeared like shades of tans and browns on rolling hills and benches. Smaller peaks stacked in an unbroken chain off the East Ridge of Mount Hayes blocked our view to the Northwest. The main flow of the Trident Glacier now guarded us from any other area. Long crevasses, one after another, made up even the flat ground. Rocks scattered across it and lateral moraines along its sides. At night, the stars were out by the billion. Stuffing our feet into our boots, we’d rise from the tent in puffy pants and parkas to gaze upward at the sky. Faint bands of the Northern Lights sometimes hung high to the North in a dull green. The milky way stretched horizon to horizon.

Designer, writer, alpinist. In 2016, Benny radically redesigned his life, throwing away sketchpads and sticky notes to begin prototyping a greater design project: a life in the Alpine.