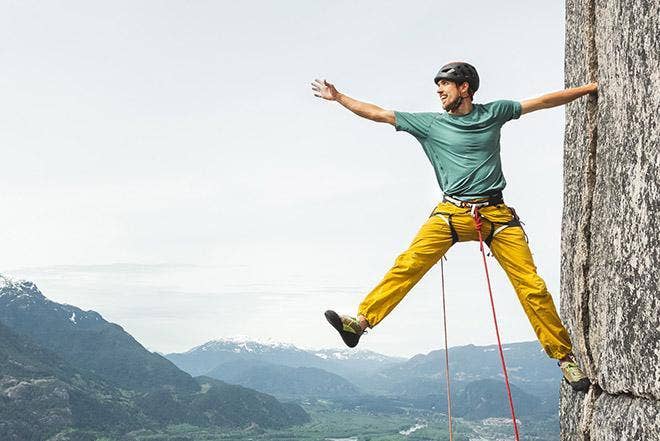 Jacob Cook and Drew Marshall put up The Drop Bear, on the Prow Wall of the Stawamus Chief, on July 23rd 2021.

Drew Marshall is known locally as “The Wizard”, mostly for his unique ability to levitate up bizarre holdless granite features with a trademark “gangle-squirm” style. As his long skinny body bends and twists and his feet flap between slippery smears, you might mistakenly believe his approach to be bordering on slapdash. However, after climbing together for several seasons and establishing many new routes together, I’ve come to learn that it is anything but - there is method to the madness. Drew is one of the best granite technicians around. Despite his abilities on the rock, deep down I mostly climb with him to get a closer look at his majestic moustache, a sight most Squamish ladies would kill for.

Having put a lot of time into new routes in Squamish over the past few years, this spring we decided to work on repeating one of the harder multi-pitches on the Chief. Colin Moorhead is an amazing but relatively unappreciated local climber who has been quietly and prolifically putting up new routes in Squamish for over 30 years! Drew and I have both admitted many times that we totally have a man-crush on Colin and his new routing skills. What better place to start than his masterpiece Gravity Bong on the Prow Wall.

The Prow Wall is situated right at the top of the Chief, around 10 pitches tall it has a ton of exposure and the feeling of a much bigger cliff. With the ocean glinting in the sun almost a kilometre below, the snowy mountains on the horizon and the eagles soaring around, it really feels like being up on the side of a remote big wall.

Gravity Bong is 11 pitches and most of them are steep, pumpy 5.12 cracks, with the 13a (7c+) crux at the very top. The hardest part is staying fresh through all the physical crack climbing on the lower wall to arrive at the crux with enough burl left in the tank to execute the steely crimp-laybacking.

What I love about big wall free climbing is the challenge of quieting the mind. As you get higher and successfully climb more pitches, the pressure to finish the route becomes stronger and stronger. On our first attempt at the entire route we arrived at the crux after a long day of hard climbing, I could feel the pressure! But as I pulled into the initial crux sequence I hit that elusive empty mind flow state, the pressure melted away and even the exposure of all that empty air beneath my feet faded into the background. My feet padded precisely between tiny granite scoops, weighting each one the perfect amount, enough to stay on the wall, not too light to slip. My hands flicked between the crimps quickly, with the bare minimum of readjusting on each hold. Flick and go, flick and go. Arriving at the anchor I didn’t dare to speak to avoid breaking the spell. As Drew followed the pitch I almost couldn’t watch, I so desperately wanted him to send as well, it’s so much sweeter sharing the success with a friend. Would the wizard work his magic again?? As he arrived at the anchor we looked at each other, both barely believing that it had actually happened. The send pineapple tasted sweet this time.

“This season Drew, we’re going to focus entirely on repeating routes, and definitely not get sucked into any new ones.”

A week later after a local tip-off I threw our 200m static rope off the top of the Prow Wall and rapped into the unknown. Hanging in space, way out from the wall I could see all the features, stepped roofs, corner systems and cracks. Connect the dots. Right on the arête was this thin bottomless corner, maybe possible to climb via combination of stemming or wild compression moves. Maybe a new line? Definitely worth a look.

The next time we fixed and rapped in close to the wall, carefully navigating the features to arrive above the arête. Hanging on my GRIGRI I scrubbed moss from the crack and scrittle from the wall. This thing could be sick! I hope it goes.

While repeating Gravity Bong I felt like we got to know Colin and experience his vision. This is something I’ve only appreciated after climbing new routes myself. As we pieced together our new line, thousands of tiny decisions allowed us to create an experience for someone to one day follow.

We dubbed the arête the “Bear Hug” pitch. It’s position is wild - a bottomless arête above a huge roof, the forest far below. For most of the pitch I climb spread-eagled against the rock, arms wide, feet pasting on slippery smears below. I stay on only by squeezing the overhanging “fridge” as hard as I can - a crucifix position. I alternate between heelhooks and dropknees to allow one arm to slap a foot higher up the arête. The problem is that this fridge-hugging style doesn’t make it easy to take a hand off to place gear, or even clip. I was somewhat dismayed to find that a lot of the pitch did take good gear, albeit tiny offset micro-cams and peanuts. This was a spicy one.

The pitch below isn’t much easier. “The Bear Hang” – there’s a theme here – features insane upside down knee-bar craziness. After jamming wildly through the roof, you stick the fingerlock on the lip and swing your legs way over your head, into what Drew calls a “surprisingly restful knee bar”. I’m not so sure…

After two months of hard work, scrubbing, bolting, rehearsing sequences, we were ready to try from the ground. Our route would be 9 pitches in total: 4 new ones, 2 of which are hard (around 5.13) and then straight into the hard climbing on another existing route, Teddy Bear’s Picnic.

On the final push, Drew skilfully magicked his way through “The Bear Hang”, taking a moment to chalk up in his upside-down “rest”. I followed cleanly by the skin of my teeth. This brought us to the base of the arête.

As I pulled on to lead the Bear Hug pitch my heart was pounding. “Maybe we should have just added just one more bolt…” This time I found it harder to quiet my mind, my feet crept on the slippery smears as I fiddled in the smallest offset micro cam. I jittered up a couple more awkward off balance moves and gingerly lent leftwards into the kneebar, as my core tightened I began to shake slightly. I fumbled around trying to unclip the green peanut from my harness and tentatively slotted it into the seam, the last good pro before the runout. I looked at the peanut. The peanut looked back at me. I could feel the air beneath me sucking at my heels. “What am I doing here??” I took a deep breath and looked upwards at the crux enduro-compression section. I managed to quiet my mind, and despite the pump, the negative mental chatter faded into the background. “You love this stuff, let’s go!!” I blasted upwards. No time to think, feet quickly pasting, hands alternately slapping up either side of the overhanging fridge. The peanut got further and further beneath me…

Surprisingly for both of us we sent the entire route with no falls that day! Drew and I seem to bounce off each other and once our day starts going well it just gets harder and harder for us to fall!

Despite the peak experience of finally sending, the main thing I got from the route was enjoyment of the entire process, discovering the line and creating the pitches with my friend Drew. I don’t think I’ll ever get tired of creating new routes, onto the next one!

Jacob likes getting away from the every day and uses climbing to find ‘wild things and real experiences’. Whether it’s bold grit routes, big walls or solo aid missions, you can be sure that Jacob is having fun doing it.