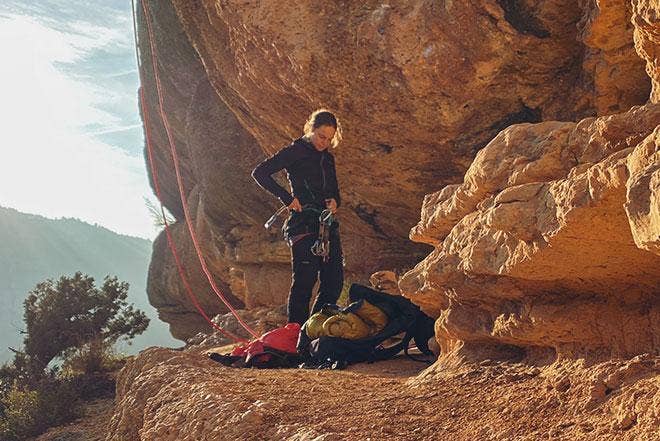 One of the things I love about climbing is that it takes you to some amazing locations. I’ve been lucky enough to climb throughout Europe as well as in Australia and the United States. Cheap flights and a wealth of information online means that few climbing destinations are secret these days and many places now have a truly international feel with climbers coming from all over the globe in search of good rock.

The friendly and inclusive nature of climbing, where people from all different countries come together to share a joint passion, is one of the things I most like about the sport. However, it does mean that it’s not always easy to experience the local culture in some of the more popular spots.

The prevalence of English as a common language is both a blessing and a curse, making it much easier to travel but harder to immerse yourself in the local culture, and often you end up speaking English the whole time you are away. I’ve had many a trip where I’ve come home feeling like I didn’t really learn much about the country I’d been to, which always feels disappointing.

Two of my favourite climbing locations in Catalonia are Margalef and Montserrat. Margalef is well known to many as the home of hard routes, such as First Round First Minute (9b) and Perfecto Mundo (9b+), and you often see elite climbers from around the world trying the famous lines. The sport routes are relatively short, very pockety and not super-technical. Fitness is essential here.

Montserrat is perhaps less well known but and is home to a huge quantity of excellent multi-pitch routes as well as some sport sectors. An old-school venue located just outside of Barcelona, the grades are stern and the bolting on the multi-pitch often adventurous, but this all adds to the experience and charm. Some of my happiest climbing moments have been sat belaying at the top of one of the huge rocky towers, looking out at a view that stretches for miles around. For anyone who has not been, I can highly recommend it.

Most years, we plan a trip to Catalonia for the Christmas period and this year was no exception. This time around we based ourselves in Margalef, hoping for some sunny bolt clipping after the busy build up to the festive season. Unfortunately, the weather didn’t play ball and most days we woke up to near-freezing temperatures and low-lying fog. Some days we wrapped up warm and braved the cold, and others we escaped down to Masriudoms, near the coast, for some much-needed sun. Never have I been so glad to have my Rab Vapour-rise Pants!

We climbed nearly every day that we wanted to, but it was definitely harder to get going in the mornings and the days were shorter than normal because it was too cold to rest much between goes. If I’m honest, it was both good fun and a little frustrating in equal measure.

On the coldest day, I climbed a route in full thermals, fleece and a down jacket and still ended up colder at the top than when I started. However, later that afternoon the sun came out – fleetingly – and we had an amazing few hours of perfect conditions, reminding me that as with all things, your fortune can change in an instant.

Highlights of this trip were ticking a 7c called Habana Club at Sector Racó de la Finestra by the skin of my teeth (the best ones are the ones when you have to fight!) and having burns on Freeman (8a), which unfortunately got wet before I could finish it off. For anyone who loves a two finger pocket, you should definitely try this route!

Despite the difficult weather, it was still great to be back trying the great routes Margalef has to offer and to have a holiday where I could combine my passion for climbing with my love of learning languages in a place that I have come to know so well. I’m already planning my next trip to this brilliant corner of the world.