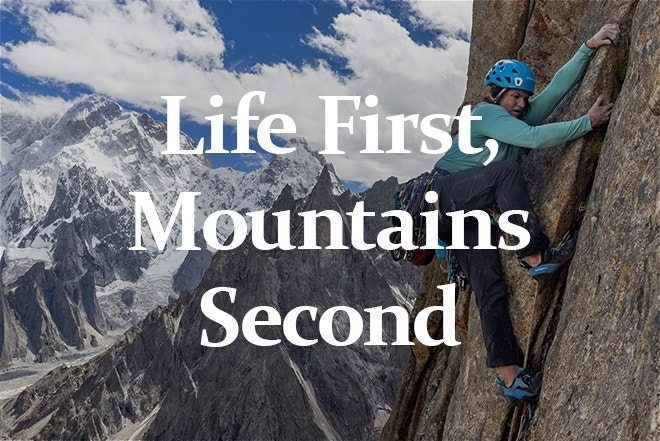 Pakistan has always been on my to-do list, whether climbing new routes or repeating routes my idols established in the 90s and the 00s. The opportunity arose when my good friend Sarah Steele proposed establishing new routes in Pakistan. Immediately I responded, "when do we buy our tickets?"

In 2018, I went to Zanskar, India, to establish a traverse on an unknown peak. We were half successful but had to retreat due to a big storm. Since then, I chose to train and learn more about myself, how to big wall free climb, and get mentored on aid climbing. I knew the day would come when I felt ready to venture into the unknown to a remote area with a new team.

Sarah and I called Josie Mckee and Sam Stuckey to join the expedition. Unfortunately, Josie and Sarah had to bail due to personal goals that would interfere with the trip. I needed someone as tenacious and passionate about climbing as I am, so I called Sam to ask if he was interested. Stoked and on board, Sam was ready to assemble a team. He had invited Dakota Walz and his photographer friend Lane Mathis to come along.

It was my turn to ask someone; Thomas Bukowski would be my perfect match for this trip. Sam, Dakota, and Lane had a lot of experience in climbing with one another and establishing new routes. At the same time, Thomas and I climbed a couple of times together in Yosemite Valley. I knew going with all men would come with different expectations and camaraderie.

We all agreed to go to the Charakusa Valley to establish new routes and climb routes that Vince Anderson and Steve House have previously established with other partners.

On August 3rd, 2022, we would start our travels to Skardu. However, Sam realized hours before going to the SLC airport he had left his passport in Moab; he would be meeting us in Skardu a day or two later. Once we all arrived, Sam broke more news that his bags would not make it. Those bags had our nuts, bolts, hangers, and other items we would need to succeed. Yet our timing could not have been more perfect because Austin Siadak, Babsi Zangerl, and Jacopo Larcher had just finished their amazing and successful trip on Eternal Flame. They were so kind to lend us a bunch of equipment we needed, and if we needed anything else, we would find it in Skardu, at local mountaineering stores. Once we collected the gear and accepted that we would not have nuts for the routes, we packed up to start our travels to Hushe.

From Skardu up to Hushe, a series of villages occupy the valley: Machollo, Thalis, Marzicon, and Kanday. Magenta, lavender, and red wildflowers danced alongside the lush green landscapes that covered the valley floors while the wheat stood tall and would soon be stored away in the stone houses for food for the winter. We saw cows and goats cause traffic jams, and watched buses filled with chickens stop at each village to sell to the villagers and businesses.

Hushe was the last village in the valley and the starting point of the Charakusa Valley trek. Our guide, Ilays, invited us to his home in Kanday to have lunch with his family and friends. I will never forget this moment on the trip because it was an intimate occasion with the most genuine humans. We sat together in the living room enjoying Coca-Cola, tea, french fries, crackers, and cookies. Once we arrived, our team slept at the North Pakistan Adventure guide house, where we met all our porters, the cook, and the assistant cook, and weighed all the gear for the porters to carry to base camp.

The following day, we woke early to finish packing and trek to our first camp. Ahead of us lay a three-hour easy hike, warming our calfs up for a 10-mile uneven glacier hike the following day, before arriving to our new home for a a couple of weeks. We enjoyed games and backflips with the porters that evening at camp one.

At 5:34 am on August 8th, the team began trekking towards base camp, at 14,300 feet above sea level. The 10-mile hike would help us acclimatize. We were in awe of our porters and cooks: their ability to hike in plastic shoes, hiking with metal frames that held our bags, they walked faster than the team while smoking cigs. It was incredible.

Giant mountains scaled alongside us while the wildflowers enchanted us. We found an Ibex skull that we posed with for a quick photoshoot. After hours of steep hiking, satisfied and tired, we finally reached our basecamp. In a farm-to-table moment we realized one of the porters had hiked a goat and a chicken to camp; this would be our nourishing food for the expedition.

Sam, Dakota, Thomas, Lane, and I had our tents provided by North Pakistan Adventures, a cook tent, and a dinner/ hangout tent for breakfast, lunch, and dinner. The team of porters would set up our camp, which was a reverse role for me since I am a professional guide who usually does this for clients. The first week at basecamp was rough for some of the team due to altitude sickness and weird stomach issues from the drinking water or food. I was lucky not to get sick, so I scouted for low-hanging fruit until Dakota felt better.

The Charakusa Glacier is a dry glacier at this point in the summer. Yet it’s tricky if you choose to go a specific way. I went across the glacier about seven times, weaving in and out of undulating terrain, hearing the glacier melting and crashing. Rockfalls and avalanches had a theme of their own. One day I was pointing at a potential line, and the next day the entire wall came down where I wanted to put a new line. Crazy.

Our first objective would be Farhod Brakk, a 3000ft monolith holding a stoic position in the valley. One of the locals told Dakota, 'Farhod and its twin to the east, Fathi Brakk, are named for a married couple in the Hushe Village that were "good at dancing."' We broke up into teams. Sam and Thomas would give the North East Ridge of Farhod Brakk a try, which was attempted in 2011 by a Spanish Team that retreated two-thirds of the way up. They made two attempts, but unfortunately, the weather and sickness did not grant the team a send on this trip. At the same time, Dakota and I attempted a new line on the north face. We put up a bold 400 feet on the feature. However, the rockfall stirred up a lot of doubt and fear of being killed in the Charakusa. Life first, Mountains second.

We bailed. When we trekked to base camp, I noticed another potential line on a peak in the middle of Naisa Brakk and Spanster Brakk. The feature rises to about 16,300ft. According to Steve House, the feature was climbed previously by at least two parties but did not appear to have a name. Dakota referred to the peak as Ishaq Brakk, after a friend from the town of Hushe.

Dakota and I fixed the first 700ft of the route on day one. We came across tat on the skyline of the feature, but that would be the only sign of human travel for the rest of our route. I needed a rest day. The following day we made a 20-hour push to the summit, and back down to the ground was the most incredible experience. Dakota and I swapped leads, taking on very run out climbing the entire way until we hit the ridge to the top. We both experienced exciting leads while cheering on each other for sending. Dakota found a beautiful but spicy line that would bring the grade up to 5.11C R. However, once we were in more demanding terrain, each 5.10+/11 pitch had spice. The climbing reminded me of the Black Canyon of the Gunnison and routes on Middle Cathedral in Yosemite Valley. You cannot fall. Dakota decided to finish it to the top, even though navigating in the dark to descend would be the next crux.

I was in the lead for the descent, so I reached into my pack to find out that I forgot to put my headlamp in the bag. Dakota lent me his only headlamp, and we began the start of the adventure down. We left slung tat around horns and carabiners and drilled two single bolt rappels with the proper size drill bit. If future parties repeat our route, they must pioneer their descent down with two ropes.

As my two feet hit the ground, it started pouring rain. The route was named "Pull Down the Sky" because we felt the sky come down hard for the next few days. Ilays and the assistant cook met the team as we walked back to camp with cookies and hot tea.

Smiling ear-to-ear but needing a few days of rest, the team decided to go up to Naisa Brakk to climb Tasty Talking (510+/11- Steve House, Marko Prezelj, and Steve Swenson). Ahead of us was another 20-hour day with an up and down onsight for the entire team.

On rest days we filled the time by getting to know one another and watching Dune and Star Wars and wandering around to find boulders we could climb on. I made an effort to become more present. I chose to live without sadness by not living in the past, nor would I feel anxious by living in the future—just having gratitude for this moment in life

On August 29th, we started our travels home back to the States. However, my journey would continue because I had an AMGA Alpine Guide Exam the day I flew back to the States. It would be a ten-day exam in the Cascades with Karen Bockel and Larry Goldie as my examiners.

I was cutting it close by not giving myself a moment before the exam.

During exams, the pressure is heavy, and the candidates need to handle the stress by rolling with the punches. One of my favorite moments was with Larry and Aaron while climbing the Fisher Chimneys on Mount Shuksan. I looked back at the guys to say, "I'm just so happy. Thank you, guys, for a wonderful day." Larry smiled while sharing the same passion and happiness I felt at that moment. All I could do was my best.

Now I can officially call myself an AMGA Certified Alpine Guide. I just sent two big trips back-to-back; this never happens! At this point in my guiding career, the ski discipline is the last step in the International Federation Mountain Guide Association Certification process.

Be bold, take risks, and take on the fears that come with the process of failure and success. Let go for a moment to be present. Thank you to Rab for supporting us.