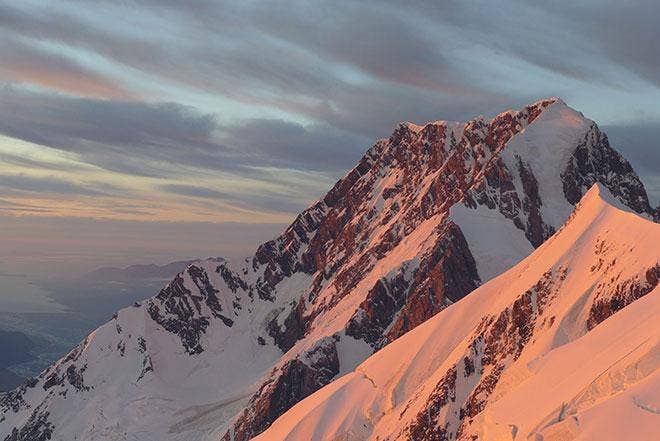 I’m not a big fan of waking up early, yet I seem to have chosen a lifestyle and career where my phone alarm has seven different wake-up calls set between midnight and 6am. It’s the hours of darkness that are the worst bit, trudging across glaciers when it’s cold, but still warm enough for you to work up a sweat that mingles with your sun cream. Summer mountaineering in New Zealand is certainly a game for the larks rather than the owls, but those early sunrises open up the

With such a varied array of adventure sports on offer, it's difficult to concentrate on just one, but I was here to enjoy the climbing and mountaineering above all else. Whilst New Zealand's climbing is something of a poor brother to that found in neighbouring Australia, there are still some excellent routes to be found, and what it lacks in quality it certainly makes up for in adventure. The alpine rock is generally loose and adventurous, but down in the Darran mountains the granite is pristine, though often difficult to access.

One of the reasons for how quiet the mountains are is their inaccessibility. Travel into the heart of the mountains has become increasingly difficult due to rapid glacial recession. The lower section of some glaciers have become impassable, whilst the boulder-strewn moraine slopes can be too unstable and steep to bypass. It has become the norm for teams to use a short helicopter flight to access the mountains and un-manned mountains huts – costing both money and adding to a sense of commitment if the weather prevents the return helicopter journey as planned. Adding to this is the lack of phone signal; for communication from the mountains, you'll need to carry either a satellite phone or an emergency beacon.