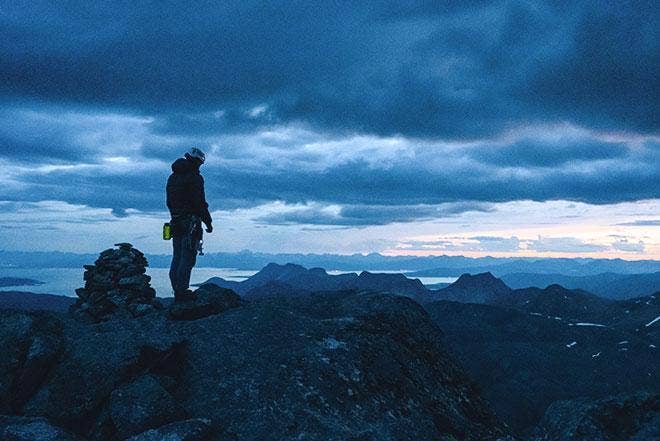 These days, I spend a lot of time exercising as usual, and also have a lot of time to daydream. Dreams of both new adventures, and old ones. One fond memory was climbing Stetind, Norway's “National Mountain”. In September of 2019, my friend Johan who lives in Tromsø started talking about the trip and climbing the iconic South Pillar route. Johan had been there before and was willing to be the host and guide for the climbing trip. How could anyone say no?

Above you can see the face of Stetind, with the South Pillar in the left half of the photo

The approach to the route is a 2-3-hour hike, with somewhat exposed terrain at the end. I would recommend bringing a larger backpack for part of the approach. The large rock by Svartvatnet is a good spot to drop the larger backpack, as from then onward - Light is Right. Bring your climbing gear, enough food and water (and some emergency rations?), phone with fully charged battery, light first aid equipment and a down jacket. Ditch the unnecessary stuff.

Tor Berge is a dedicated outdoor enthusiast, content creator and avalanche safety engineer that enjoys inspiring others to safely enjoy the mountains. He is based in Bergen, Norway and is a Rab and Lowe Alpine ambassador. @2rberge