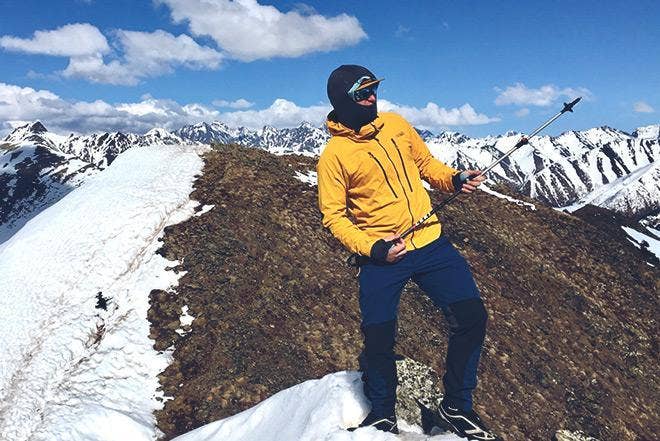 When I topped off the gas tank and sped out of New Hampshire on April 2nd, I tightly gripped the wheel, smiling ear to ear and with a 5,500 mile gaze - at the end of my longing stare was the vision of returning to the Last Frontier.

It was my third time committing to the cross-continental road, each special in their own right. This time my co-pilot was a lifelong friend, Jeremy Valcich, with whom I shared a childhood with. Naturally, we'd gone different directions but our friendship never suffered. Now we were together again going for an unforgettable journey to Alaska. With the car packed completely full with climbing gear, expedition equipment, and clothes we turned up the tunes and put the pedal down.

Working our way through the Midwest and then hitting the Rockies in Montana, I must admit it was a relief to spend time again with one of my most sacred friends, just him and I, and let him into my world as a traveling climber and guide. Jeremy was now a success in the airport industry having gained ground at the airport in Jackson Hole and now his current position in Fort Meyers. We'd clearly gone different ways but aside from our friendship, we still shared so many personality traits. A passion for travel was a key pillar of his life and our shared appreciation for different cultures, random facts about people, places, geography, sports and history populated our minds.

Heading up into Canada, the true scenery began. These mountains are of the finest on Earth and though the days of driving were taking a toll on us, the good weather welcomed spectacular views and we were on the edge of our seats. It was the end of the ice climbing season and thanks to insight from Tim Banfield, I was able to show Jeremy what my life was all about. On a cool spring morning we drove the famous Icefields Parkway, peaks of the Canadian Rockies towered all around, still covered in fresh winter snow and with not a cloud in the sky- it was a great day to be there. These mountains, though often unforgiving, represent one of the hearts of Alpinism and are the true kingpin of winter water ice. We parked at "Beauty Creek" and went for an hour hike to a beautiful North Facing ice route that cascaded down classic Canadian Rockies ledges called "Shades of Beauty," a three-pitch WI4.

Jeremy has never climbed in his life, unfortunately for him, it would be hard to get a better combination of ice, weather, and setting in the future. The bar was set high. Kitting him out in gear from Rab and tying him into a Fusion Nano rope from Sterling- we started up the route. Jeremy took to it quickly, though of course showed his first-timer fatigue as we all do. We topped out the route in perfect conditions and relished in our lonesome position. It was a Monday in April and it felt like we had Jasper National Park to ourselves as the snowy peaks stood proud around us and there wasn't a sound, not even the wind. It was safe to say Jeremy now understood why I live this way and that night we smiled together over beers in the town of Jasper.

The long road ahead from Jasper to Alaska is trivial, mysterious, and wonderous. This is the point in the drive where you're "sticking your neck out there." Driving through the Northern Rockies and Yukon Territory, sleeping in the car, dwelling in Hot Springs and pounding out mile after mile, we drove through true wilderness. We saw every animal from big horned sheep and bears to moose and bison, we even found a massive caribou antler and fell asleep to the Northern Lights on a mountain pass. We only saw one other car that night. I meet new people in new places regularly, as climbers do, but for once I was with one of my oldest companions.

However it was certainly spring and while we enjoyed our last few days together - my mind began to shift into expedition mode. It was now mid-April and I said a memorable goodbye to Jeremy, lifelong memories were the "elephant in the room," he wished me luck and got on a plane home. I had one night alone before Jon Lykins, my first of two partners would arrive, I didn't fall asleep till late that night. Caught between milestones, I stared at the ceiling with a nervous knot in my stomach. We were now going to the big mountains. Will, Courage, and Toughness were now the name of the game. I felt lonely, I thought about my old friends and my old life. I thought about my family. I thought about past love and brief sparks. I thought about how the selfishness to live life as a climber had put physical and metaphorical distance between relationships of my past. Still, I finally fell asleep in admiration of the decisions I'd made that brought me to where I was that night. I drifted off in peace, to the words of the beautiful quote by Mary Oliver that changed my life…

"Doesn't everything die at last, and too soon? Tell me, what is it you plan to do with your one wild and precious life?”