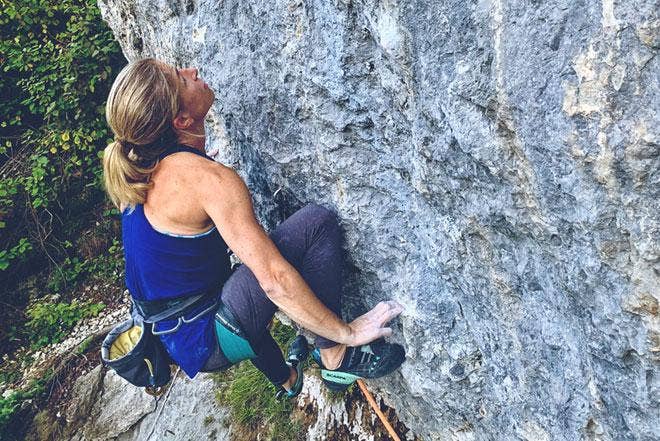 Writing a review about my 2019 climbing season sounded pretty simple to me at first. What could be easier than talking about what you have experienced yourself during a year of climbing? But this task turned out to be more tricky than expected

But this task turned out to be more tricky than expected. What exactly is the essence of a season, what will I remember later on? Facts and figures? Trips? Particular routes? The people I shared time with at the crag? Certainly a good bit of everything. But this year, I’d go for a particular lesson on ambition, expectations and pressure which I had to be reminded of once again.

Starting the year in Sicily with our family was definitely a great way to welcome the 2019 climbing season. Sunshine, sea, good rock, great terrain for the kids and a beautiful landscape gave us a maximum taste of Dolce Vita. I climbed a lot, mainly trying to on-sight or flash the routes or climb them in a day. Climbing as a family is a precious gift and I would never ever like to miss it, but it can have its exhausting moments. Carrying more than double the stuff we’d bring if it was only the two of us, keeping the kids happy and safe at the crag and respecting their needs and wishes are part of the game, but they consume a certain share of your energy so it is helpful to save it in other areas – which on our trips to me means minimizing project pressure and going with the flow.

Back home in Frankenjura, my focus switched to bouldering, something I love to do when temperatures are too low for sport climbing. I found myself some fun projects and could finish the cold season with some sends that made me pretty happy, including several 8A and 7C+. Bouldering is a special game which to non-climbers might seem even more absurd than climbing already is. But I definitely share the fascination of working and refining micro-beta, adjusting the position of your fingertips or feet by only a few millimeters and sometimes not even getting your bum off the ground. Plus, I benefit a lot from it in my sport climbing, too.

But deep in my heart, I am a sport climber so as soon as temperatures allowed for, I was back on a rope. And already back then – at the end February – I was attracted by one particular line which I had ended up more or less by coincidence when spending the day on a crag around the corner. I checked out the moves of “Headcrash” (8c) just briefly but was blown away by their beauty immediately. In the following weeks, I returned to this place quite often and worked the route on a fixed rope on my own. I enjoyed having this special place completely to myself, in full silence and with 100% focus. These moments altered with days when going there with friends or the whole family. Then, the focus was more on the approach hike, watching the kids discovering the tractors, horses, insects and flowers along the way or giving them a spot while they were scrambling up the little rocks around. Interestingly, the day I could send the route was one of these family days – the kids would run around and play thQeir games, they were loud and happy and we were happy, too. A perfect day – and a good reminder of the interplay between priorities, expectations and pressure.

Just a few weeks afterwards, I surprised myself with clipping the anchor of the powerful “Intercooler”, another Frankenjura 8c with a totally different style than Headcrash. I had been on the route once before having kids, but back then I thought that it was not meant for me. Expectations where rather low when I went back to it this year but at the same time I was pretty curious. I loved figuring out my beta and eventually could climb the route in one of those rare flow moments.

Fast forward to fall, as that was the time when things got interesting in terms of strategy and mindset. During summer, a few more ascents up to 8b+, both at home and on little vacation trips, had boosted my confidence, and I also had managed to frame the rather little steps in my two long-term projects as progression even if a send might still be far away. Of course confidence can be a good thing for climbing in the sense that positive thinking can create a positive reality. So when checking out yet another 8c and feeling that the moves and even links were possible without major effort, I got pretty motivated again. But then I made a mistake – instead of embracing the step-by-step-progress, I soon became quite impatient with myself, getting frustrated with every attempt that ended before the top. Two times I came pretty close to the send, but then never reached my highpoint again. I certainly had not become weaker and I also can’t blame conditions or any other circumstances. I just had started to take things for granted, to expect too much and to let numbers become too important.

I think that pursuing goals and trying to push harder is something natural to many of us and is not bad as such. Of course climbing and climbing at your limit does not change the world to a better place so it certainly does not make sense in a more holistic way. But it can make sense to yourself which I think is something precious and as a mother I’d be more than grateful if my kids one day find their own passion, giving them a meaning and leading their way through life. Yet, I admit that it is easy to get trapped in a more-is-better-mentality – more routes, more hard ascents, more climbing days etc. –, which throws its shadows over the fulfillment and inner peace climbing means to me.

Right after having my two kids, for the first time ever I had no expectations towards my climbing at all. Every single route, every day out at the crag was something I registered as a bonus, and I was grateful that my body was still capable of pursuing my big passion. This mindset made me enjoy my climbing as much as never before – and also has been the basis for some of my hardest ascents to date. Yet, at a certain point this season, this deeply rooted gratefulness was about to gradually fade away and I started to expect too much, something which immediately resonated with my climbing performance.

As simple and basic as this mechanism is (and of course it was not the first time I had become aware of it), it is something different to cognitively know about it than to really apply it. The line between a playful, “unambitious” ambition and pure stubbornness is blurry and it is likely that I might cross it again one day as I probably will never be a Zen master. But I am optimistic that the learning curve is going the right direction, with each try getting me a tiny bit closer to the art of “unambitious ambition”.