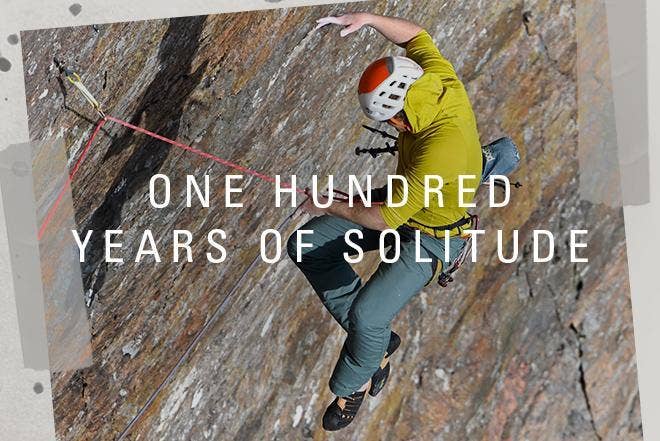 Coming out of a long winter of lockdown restrictions in Wales, it seemed apt that our project for this trip was called ‘One Hundred Years of Solitude’, an E8 on the remote cliff of Càrn Mòr in the north-west Highlands.

Càrn Mòr, situated just south of An Teallach above the shores of Fionn Loch, has a quintessentially ‘Scottish’ feel. Based at the southern end of the somewhat ironically named Fisherfield Forest, heather stretches as far as the eye can see, deer roam the shrubland and barren rocky ridges leading up Corbetts to the north and south. It felt a little bit like we were in the land that time forgot. Wonderfully remote, yet conveniently near to the amenities of everyday life. A beautifully situated lodge sits in splendid isolation beneath the crag, whilst the Carnmore bothy, known locally as the Cowshed, lies a couple of hundred metres away, providing an atmospheric base for our trip.

As Angus and I rolled into the car park at Poolewe after a nine-hour drive from our homes in Wales, we found a slightly dishevelled looking Ray strolling back into the car park from the nearest coffee shop. He looked a little bit harried after his short drive from Aviemore. Ray Wood is a long-time friend and would be joining us on this trip to take photographs and provide much amusement with his rakish humour. A man of many talents, Ray has likely photographed more hard trad first ascents in the UK during his aeonian career than any other. In preparation for this trip however, he’d been chiefly concerned about finding the best organic coffee and boil in the bag meals from Waitrose rather than packing. As Angus and I unloaded our bikes and pre-packed bags from the car, Ray’s camera kit, health products and climbing equipment were strewn across the car park like a hastily set up car boot sale.

After an hour’s wait and some difficult decisions for Ray regarding whether to take the aero-press or stove-pot, we were away. The journey into Càrn Mòr is about 20km from Poolewe on forest tracks and excellent single track. Being a relatively flat journey, it is also a popular mountain bike journey, with a through route from Dundonnell to Poolewe ranking amongst the finest in Scotland. With that in mind I’d suggested that we cycle in on e-mountain bikes to halve the approach time and enjoy the riding. I would be on my trusty old Vitus bike, Angus on his swish new Merida and Ray had hired an e-bike the previous day from Aviemore.

As any regular cycle tourer will know, it’s best to attach weight to the bike via carrying systems rather than carry it on your back. Unfortunately, only Ray had bike bags, so Angus and I were left cycling with heavy packs waggling about on our backs! Leaving the estate 4x4 tracks behind, we launched onto a fine section of single track traversing the moorland south of Fionn Loch. We were really beginning to have fun and the beautiful weather was adding to a special experience. The newly sponsored Merida mountain biker Angus was beginning to get to grips with his shiny new bike, and despite very little mountain biking experience was riding well. Ray, with his bohemian assortment of bike packing gear, was enjoying his first outing on an e-bike and everything was going beautifully. But bikes, as is there nature, always throw up a few hurdles. On one of the many rocky drainage features on the trail, Angus managed to bash his tubeless back wheel putting a little ding in his rim and a hole in his tyre. Easy enough to do, especially with such heavy bags. Angus had never changed an inner tube before and with Ray claiming he was purely on photographic duties the job came down to me to change the puncture. With sealant squirting out of the tyre and over my clothes I got my spare inner tube, inconveniently located at the bottom of my rucksack, into the tyre, pumped it up, and Angus was away again in no time. Unfortunately, 20 minutes later, and after I’d caught up with Angus and Ray again, it seemed that Angus had a slow puncture. Having travelled light and with only a short journey in, I’d only brought the one spare inner tube. Fortunately, the tyre was holding up long enough between re-inflations to limp us to the bothy and our camp-spot for the night.

With tents up and midges out, we finally had the chance to look up at our objective for the following day. Càrn Mòr rose steeply above us and in the warm evening light the glowing orange wall that was home to our project stood out. First climbed in 2013 by Scottish stalwarts Iain Small and Murdoch Jamieson, ‘One Hundred Years of Solitude’ was rumoured to be one of the finest E8’s in the UK and unrepeated following the pair’s first ascent. It had been my suggestion to head up to this remote part of Scotland to attempt the route but on reading the forecast which was showing rain showers on our first climbing day and torrential rain the next, I’d had cold feet and suggested we climb in the drier Cairngorms instead. I was out-voted by the likely lads who, having never heard of the route before I’d mentioned it, were now fully committed to the idea!

We were alone at the bothy as the late-night glow slowly diminished into a midge hell. Ray and I retreated into our tents whilst Angus closed the door on his palatial Cowshed for a quiet night’s sleep. I woke up all-too-few hours later to the drizzle of rain on my tent. “Oh dear,” I thought, and the forecast was only set to get worse. Angus’ peaceful night had been disturbed by two Munro baggers joining him in the bothy after midnight only to snore the rest of the night away. Ray and I found this mildly amusing, feeling smug with our decision to take tents. Angus was dead to the world at 9am and having had a tough week with two days of work, he hadn’t quite been able to catch up on sleep during his nine hours in the passenger seat the previous day. Ray was in turmoil as well. After unpacking his weeks supply of freshly roasted and ground, organic, fair-trade, WWF coffee, he’d found that in his deliberation of which coffee making device to take he’d forgotten to pack either. It was at this forlorn state-of-affairs that I lumped the ropes uphill in the drizzle to locate and clean the project.

After an hour and a half of swinging in space, linking up holds and working the route I returned to the cliff top in a grumbling tired state. Angus arrived. The problem with Angus Kille is that he’s both, really nice, and very talented. I’d love to hate him, but unfortunately his innately amiable personality makes it very difficult even for a cynic like myself to pick flaws in. Whilst I grumbled about the weather, the climb and carrying heavy bags, Angus cracked on and worked the project. It was at this point that Ray arrived, bringing his Zen-like state of waiting to the crag.

The route itself finds the line of least resistance up the leaning 55m wall. The first half of the route has relatively straightforward climbing, though bold in places, up to a cluster of gear before the crux runout. From the gear, you launch up the wall above via relatively good but spaced holds with a long reach up for a juggy break just as your arms are beginning to wilt. Another not so easy sequence for tired arms leads up from here to easier ground and the top.

With no time to rest and recover we abseiled in to try the line. Angus was on good form with a recent ascent of an E10 in Pembroke and keen to have a crack at the lead. I on the other hand had tired and weak arms after a winter of running and biking! Angus went up first, making smooth progress up the lower section of the route. He committed to the crux section smoothly, but a slight hesitation at the crux suggested his arms were tiring. A long throw for the break and the route was all-but in the bag, as he topped out easily with a little cheer. I hadn’t quite made my mind up about whether or not to go for the lead, but with the sun back out and feeling a bit warmer again I told Angus I’d give it a go, although I was keen for him to leave the gear in for me on the lower half.

I climbed up to the cluster of gear before the crux like a sack of potatoes and spent a good long while deliberating whether to commit to the next section or not. As a cloud came over giving some welcome respite from the sun, I decided to go for it and immediately felt surprisingly strong on the crimps and able to chalk up on the crux holds. This surprise feeling of strength was all too short lived and by the end of the crux runout, having skipped my last gear placement and with elbows pointing skywards, I took to the air! After a long rest, it seemed like the easiest way to get back to the top of the crag was the daunting option of climbing out up this route. So I pulled back on from my last piece of gear and started slapping for holds. I managed to reach the belay, feeling absolutely knackered. Failure, but failure of a satisfying kind and after Angus had seconded, we headed back to camp for a celebratory bowl of tortellini.

Day three dawned wet and miserable. We were glad for the dry confines of the cowshed to pack our bags. The only person looking happy about the rain was Ray, who was keen to get some wet weather shots. Angus’ bike tyre seemed to have miraculously healed its slow puncture and we started riding out through the rain to Poolewe. Again, the journey was going well and I was starting to really enjoy the faff-free riding until Angus once again managed to smash his back wheel into a rock. This time there was a definite ding in the rim and with no spare tyre, Angus was forced into pushing his bike the rest of the way back. Ray remembered he had a spare inner tube in his car, so we started riding back together with the plan to re-join Angus and fix his wheel. A few hundred metres later Ray also managed to ding his wheel and was also forced to push the rest of the way when Angus re-joined him. Whilst I did feel some empathy for both Ray and Angus, it wasn’t enough to overcome my desire for dry clothes and lunch. I rode back alone, got changed and had a snack before driving as far as I could up the road to collect the weary travellers. Our trip to Càrn Mòr was short and sweet, but it will leave lasting memories of excellent climbing and many punctures!

Kit From This Trip