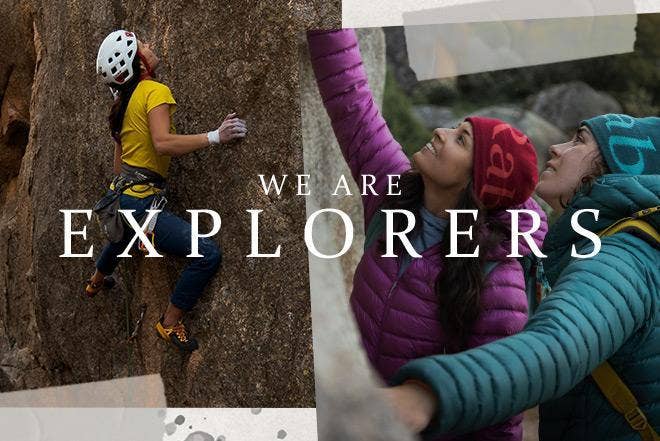 With Cristina Más and Viviana González

It’s 6am when the alarm starts to ring in the van. It’s still dark outside. The crisp, fresh air starkly contrasting the comfort inside our warm sleeping bags.

Cristina reaches for her phone and turns the alarm off, wishing she had had a few more hours to sleep. As she starts moving, Vivi also wakes up, seemingly more out of courtesy towards her friend than out of actual motivation.

While the instant coffee heats up and is filtered through a sock – a Colombian recipe from Vivi that proves useful as they’ve forgotten filters – they venture a look outside. The first light is faintly coming across the horizon, but right now they can only make out the silhouettes of the mountains surrounding them. Both are questioning their decision to go climbing as early as possible, especially considering that slept less than 4 hours.

Cristina, a nurse in Barcelona, is accustomed to hospital hours, odd sleep times and never-ending shifts. The last year has been particularly demanding at work, as any health care worker knows, and lately she’s volunteered to work double shifts to help the vaccinations. In summary, Cristina can stay active for many hours at a time, but she likes to make sure that she gets enough rest.

Vivi, a dedicated sport climber, is much more used to sleeping in a van. She actually lives in one, driving between Oliana and Montserrat depending on the climbing conditions. She too knows the importance of resting enough to perform at her best and likes to sleep until the temperature is comfortable to climb. Not today. The two climbing friends arrived at the parking spot of La Pedriza at 2 am the night before (or rather, the same night).

But all this exhaustion for what?

That same weekend, Rab Spain has organized the first Athlete Summit since the start of the pandemic, an event to meet other team members, talk about new product releases and, most importantly, go climbing with likeminded people for a few days. Cristina and Vivi are both Rab Team members and had met each other during a climbing photoshoot in Montserrat the previous year. They instantly connected and stayed in touch during the pandemic. When they received the invitation to the event both had the same idea: drive to the event a day in advance to meet and climb together again. They quickly called each other and asked the same question: “Have you ever been to La Pedriza?”.

La Pedriza is one of the largest granitic sites of Europe, only 45 minutes away from the capital, Madrid. The area is well known for its geological interest as well as its offer for outdoor activities, especially climbing. Spanning over 32 square kilometres, the intricate and complex rock shapes hold over 1000 climbing routes of all difficulties. Both Cristina and Vivi had seen pictures of La Pedriza and were immediately drawn to these particular peaks. It was the perfect opportunity to start travelling again, just after the restrictions in Spain had started to ease. They didn’t need much planning or convincing for this trip, they were psyched to explore new climbing spots.

The sock-filtered coffee is now ready, and with the first sips Vivi’s eyes start to move more actively. “La Pedriza is much larger than I expected” she says, as she gazes over the mountains around them lit by the first sunlight. Cristina nods in silence while holding her coffee tight to warm her hands. Once the caffeine kicks in, both get ready to explore. The plan is to climb a variety of routes during the day and get an overview of the area.

With their packs and ropes ready, they leave the parking site of Canto Cochino and head straight into the woods. The path to the first big blocks of granite winds through forest, thick vegetation, river crossings and broad fields. They climb one of these rocks – the size of a two-storey house – more for improved visibility than for the difficulty. From the top, they identify a distinctive, vertical crag. A quick look at the guidebook reveals the name of this rock formation: “El Cancho de los Muertos” – the Court of the Dead.

According to local legends, this peak is called Cancho de los Muertos (Country of the Dead) for a good reason. During the 19th century, groups of bandits used to roam and hide in La Pedriza after their crimes, taking advantage of the laberynthic landscape and difficult access, which prevented them from getting caught. Legend says that one day, three bandits kidnapped a young lady from a powerful family in Madrid and took her to La Pedriza. While the boss of the gang had left to the city to negotiate the ransom, the other two started fighting, one killing the other. Once the boss returned, he ordered the surviving bandit to take the lifeless body to the highest accessible point of the area and throw it down the mountain. After following him up, the boss went to push the surviving bandit off too, as a punishment. When the bandit fought back and grabbed the boss. They both fell into the abys, liberating the young lady, who was found and safely returned by a nearby shepherd. Ever since, the crag gained the gruesome name.

It’s time to climb. Cristina climbs first. She has more experience in crack climbing, as would be expected from a passionate alpinist that spends every weekend on some of the most exposed ridges of the Pyrenees. She tightens her climbing shoes and starts jamming her hands into a long vertical crack climb, called Milupa (6a+). They choose this route as it is slightly hidden from the sun between the towers of the crag. And it seems more comfortable than climbing in direct sunlight. Vivi is anxious to climb on granite for the first time and starts climbing with confidence. Three moves in, she already notices the difference: “It’s very different! These holds are so sharp and rough”. Helped by Cristina’s tips on jamming technique, Vivi doesn’t shy away from her first crack climb and masters it as if she had done it before.

Next, they climb the actual Cancho de los Muertos Southwest face. From where they are standing is impressive enough, but once they reach the top both gasp at the beauty of the sights, as Vivi states: “These views are really incredible, I can see the whole valley from up here”.

The heat, exercise and lack of sleep is starting to take a toll on them in the form of fatigue. After snacks and water, they find some small blocks to sleep on.
After a short but well-deserved siesta, they both want to climb in the natural couloir they had to cross to reach Cancho de los Muertos. A thin, straight corridor between walls explains the name of the place: “Callejón” or alley. They take turns climbing surrounded by the tall walls and gladly appreciate the fresh air that runs through the channel.

With sore and tired hands, they coil the rope and hike back to the van. Through the maze of granitic rock, Cristina finds a boulder with outstanding views. “Vivi, come up here, you have to see this!” she shouts. Climbing with heavy backpacks isn’t easy, so they help each other to get to the top of the boulder. They’re rewarded with views of the skyscrapers of Madrid in the background. They had completely forgotten that they were only 45 kilometres away from the capital. It felt different. Natural and wild. It explains why La Pedriza attracts so many outdoor lovers.

Resting at the van, the sun started to set, which makes Cristina and Vivi think about how to seize the last hours of available light. They had seen some interesting rock formations near the entry of La Pedriza at Quebrantaherraduras, so they decide to head there, this time without ropes or harness. Cristina brings her crashpad to see if they can find any boulder spots. They enjoy the freedom of just roaming an area they don’t know. Searching for an interesting boulder problem. The session ends in the dark, with the blue light flooding everything else past the dim light of their headlamps. El Yelmo, La Pedriza’s most characteristic peak is the last mountain to fade into complete darkness in the background.

It is 10 pm when the two friends arrive back at the van. Exhausted, but happy to have to explored as much as possible in one day. They cook pasta and make friends at the parking spot as they had previously stocked up on fresh beer, which no one at the site turns down. When they finally crawl into their sleeping bags, they recall how much they needed the long-awaited exploration and adventure.

“It felt amazing to travel again without all the restrictions, even if it is still within Spain” says Vivi.

They had it all in one day: hiking, roped climbing and bouldering at the end. Cristina taught Vivi the hand jamming technique for crack climbing, and Vivi pushed Cristina’s confidence to climb harder grades than she is used to. Above everything they are both happy to have climbed together again and experience this adventure together. Knowing that they still have two days of adventure in La Pedriza with the whole Rab Team and feeling the fatigue in each muscle, the conversation slowly fades until only the crickets can be heard outside the van.