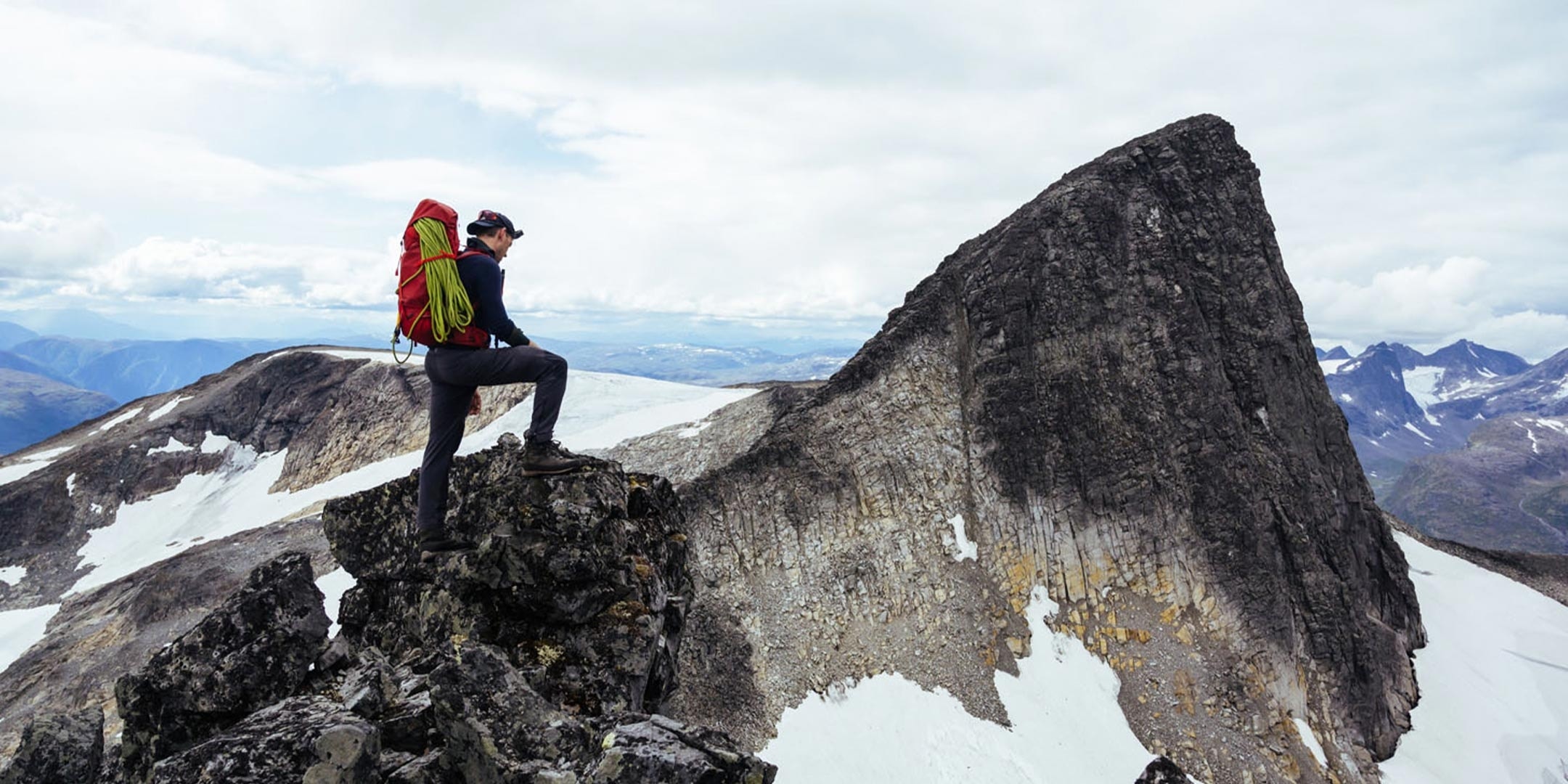 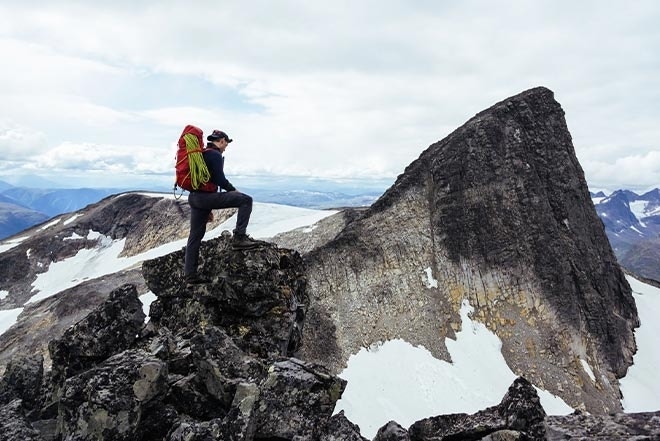 Jotunheimen means home of the Jötunn, a type of supernatural being in Germanic mythology. They are often contrasted with similar beings in Norse mythology.

Jotunheimen National Park is a mountainous area in southern Norway, home to 29 of the highest mountains in the country. The Jotunheimen is part of the Scandinavian Mountains, carved and shaped over time by glacial erosion.

Rab Athlete Tor Berge recently journeyed to Jotunheimen for a few days of peak bagging, with his climbing partner Bjørn.

Every time I visit, I get a fresh reminder of why the Jotunheimen got its share of Norse mythology.

Jotunheimen National Park’s features are large, seemingly inaccessible mountains. The valleys stretch for miles. The weather behaves unpredictably, with formations of deep fog wrapping around the mountainside. Boulders and rocks appear to have been thrown down the mountain, moved through the course of time, as the glaciers retreated nearly 11,700 years ago. Wild reindeer graze in the valleys, serving as a reminder of the remoteness of this landscape.

Our expectations for this year's trip were to summit some of the famous mountains in the area, which included climbing and exciting glacier hiking. It wasn't to be a "go as far as possible" type of trip with hairy goals, but a trip where we went as far as we felt. We aimed to set a compass heading in the direction of an interesting mountain or two, turning back when it suited us.

The first hike was Falketind at 2067 meters. To get there you cross the Falkebreen glacier and climb up the mountain wall to the ridge of Falketind. There are several routes up, and we were to follow the original pioneer route. If our motivation and energy level allowed for it, we’d planned to extend the trip to Stølsnostinden (2076 metres) via Østre and Midte Stølsnostind (2001 meters).

The glacier walk across Falkebreen is spectacular, with plenty of time to enjoy the view of Falketind. The dark, steep walls of Falketind look inaccessible, evoking a tension in the stomach.

We found the rhythm quickly, and soon summitted Falkebreen. Then we climbed a couple of rope lengths secured up the Pioneer route. Our guide book had excellent route descriptions, enabling us to maintain our substantial progress. Suddenly we were standing on the ridge leading up to Falketind, and half an hour later we were standing on top. We would have stopped to take a break and enjoy the view, but there was more we wished to achieve.

The value of managing expectations

We finished our day after 15 hours in the mountains, with several mountain peaks visited and climbed. We noticed the advantage of not setting lofty expectations before the trip, having exceeded expectations and feeling a sense of achievement on day one.

Our hunger for new adventures was already satisfied, and any experiences hereafter became a bonus.

Now it must be said that, even though we had set our expectations quite low for this trip, we planned our options carefully. Number of kilometers and vertical meters, degree of exposure, equipment, what-if scenarios and first aid equipment, were all discussed and planned.

This helps to create autonomy during the trip, where many things that could create uncertainty have already been thought through and planned. This is how we develop the mental surplus to overcome unexpected events. We were to find out how useful this was later.

After a good night's sleep, it was time for adventure again. The goal for the day was Urdanostindene, with its two peaks. The first summit is the highest (S1), followed by S2 which is south of the main peak and 2,042m above sea level. With high hopes, and fueled by the fresh morning air, we set our expectations for the day. Suddenly we saw the destination in front of us, shrouded in fog.

We made excellent progress and quickly gained terrain and vertical meters. As we reached the ridge before S2 we checked the forecast. Bjørn was concerned that lightning had been reported the day prior, but the forecast was showing clear skies. Strange stuff. We chose to continue with the expectation of clear weather.

As we ascended to Urdanostindene, the forecast did not deliver its promise of sun. Instead, we were greeted with a wall of hail making the climb challenging.

As we continued further up Urdanostindene the fog became denser. Fifty meters to the summit, on an exposed ridge, Bjørn heard a crackling sound around him. He turned around and the sound stopped, so he moved further along the ridge. The sound increased. The sound grew louder around the metal that Tor had used to secure the rope.

After a quick Google search, we realized that we had ended up in the middle of an increasing static electricity field, with the potential for lightning to follow. The weather forecast had changed its mind again, and it did not look promising.

Since we had now transported ourselves over long exposed ridges up here, it seemed silly to turn back and be a human wandering highpoint with ice axes on the backpack. Instead, we tried to push over the top where it would be much easier to get down quickly into lower terrain. I went first. When I went over the summit, the air began to crackle. This was not good.

I shouted back to Bjørn that we needed to get off the mountain.

In such situations, it is incredibly easy to make mistakes. Fear of being taken by lightning versus fear of falling off the mountain. It was all about efficient climbing down. 40 meters below the top was a mountain ledge. We decided on a longer break here, in hail and rain. A phone call to the rescue services to inform and get advice on the situation. They recommended getting down to the lower slopes, to no surprise.

We descended briskly on slippery ridges and with an imminent thought of the dreaded lightning. After what felt like a little eternity, we got into lower terrain, and heard thunder in the surrounding mountain areas.

We had felt the fear of death at the top, finding it helpful talking through this as we safely reached the lower slopes. We chatted about how we had both experienced the situation at the top and what could have been done differently.

Upon our return home meteorologists at yr.no (a Norwegian weather website) sent us more information and a scientific assessment of what had happened. A plan was made on how we would avoid this in the future. Both were happy with the review, and since the weather forecast was a lot better for the coming days, we were able to plan the next day's adventure.

Bjørn had not been to the top of Urdanostindene yet, since we had abandoned it in the static storm. We decided to go to the top from the other side, and hopefully visit Langeskavltinden and Slingsbytind on the way.

The last part of the trip was of the more pleasant variety. We visited a 2000-meter peak with no need for climbing, carrying minimal equipment, and a backdrop of beautiful weather. Our pace was comfortable, and we took our time to soak in the landscape from the summit. Our trip had exceeded all expectations.

We took with us some lessons from this trip:

• Keeping expectations under control can help build a sense of proficiency and motivation.
• Plan well, because then you are much freer to solve challenges along the way.
• Do not blindly trust the weather forecast.
• Become friends with traumatic experiences and learn from them.

Our trip to Jotunheimen provided memories for life, although we do not recommend going into an electric storm.

With wishes for a safe and eventful trip, Tor and Bjørn. As Norwegians say: God tur.

Gardiner has quickly established himself as one of Australia's leading adventure photographers with an eye, not just for action, but the human relationships and divergent cultures that make climbing and mountaineering expeditions such unique, rewarding experiences.