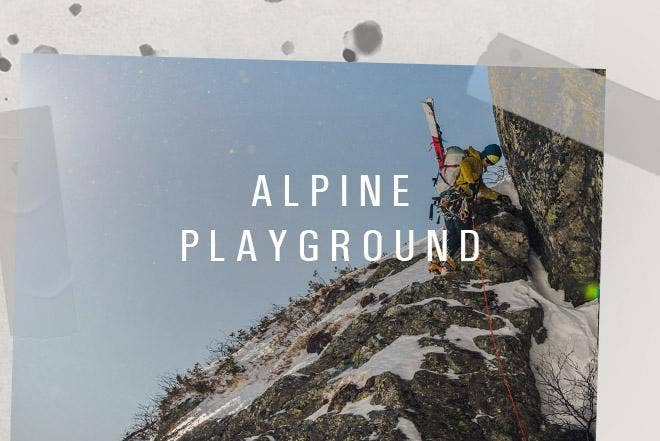 Almost as soon as my head hit the pillow the alarm went off… 1:00 AM – woof… I staggered to the car and started the winding drive up to the trailhead. The pre-dawn gear explosion is my specialty – dumping and cramming last minute things into my already stuffed pack.

I cracked a coffee and slammed as much of it as I could before we clicked-in and started to ski uphill. The whole way up the trail I kept my headlamp off, I knew every bend, switch back, and straightaway of our approach into Huntington Ravine. We hunkered down in-between a snowdrift and a huge boulder; we ate, drank and laughed loudly as we juggled our skis and poles onto our packs. Even in the darkness I could make out the silhouette of each gully and bulge of ice above. We were in the playground, and I was psyched.

Above our heads were a few hundred feet of 20-30 degree snow that fans below the gullies. I stepped into my crampons and pulled the heel bail tight against my ski boot. Hearing the familiar snap that accompanies a snug fit, I imagined myself a cowboy ready to put the spurs to er’ and charge uphill with a tool in each hand. As I slogged upward the slope began to steepen; I could see the tracks of yesterdays climbers, except they weren’t depressions in the snow, they sat raised above the surface. The compressed footprints became small plateaus as the wind scoured the snow around them.

Huntington Ravine is tucked away on the East side of Mount Washington, just below the “Alpine Garden” and is home to some of the best little alpine climbs this side of the Mississippi. Known for arctic temps and blower winds – Mount Washington keeps the East Coast alpinist psyched and prepared for unpredictable conditions in the bigger ranges. If the wind stops you can find yourself sweating through your base layer, but on an average day a hard-shell and puffy round out the wardrobe.

Over the years it has become standard practice to cruise around in the ravine with skis on your back. Climb up one gully and ski down the next. To finish out the day pop up and out of Huntington Ravine, get blown across the Alpine Garden and then rip skins and drop into the steep skiing of Tuckerman Ravine. From the bottom of the bowl a quick romp down the Sherburne ski trail dumps you right at your car – ski mountaineering at its finest – well at least for New Hampshire.

A couple hours had passed since we left the parking lot; the horizon began to glow with the darkest hues of purple imaginable. Staring off into the darkness I swear I could see our thin little atmosphere smolder from the heat of the rising sun. The black sky above began to lighten and in the distance purple began to blend with deep shades of red. We kept moving, hoping to catch the first rays of sun as we climbed the final stretch of “Diagonal Gully.”

The mountain was calm, only the lightest of winds carried small flurries of snow that sparkled throughout. Daybreak was upon us, and as the sun began to illuminate the Ravine I felt my smile grow just as bright. It’s hard to believe that this place exists on the east coast. As headlamps gave way to sunglasses we headed back down to the base of the gully and began to traverse the top of the fan toward our second objective of the day.

Standing below the largest hunk of rock around, we slammed a few calories and racked up for a bit of a mixed climbing. I launched up the first pitch scraping the tips of my skis on the edge of the rock to my right as I searched for good gear and snow free holds to stand on. Slinging trees and clipping old pins I made my way up the first pitch of “Pinnacle Buttress”, a classic summer alpine climb, turned up a notch by climbing with skis on our backs. Standing at the belay I watched as the following parties of skiers and climbers made their first appearance at the base of the fan.

A near cloudless sky gave way to sunny belays, positive moods, and warm fingers. Pitch after pitch we enjoyed the balmy temps, but could have gone without the delaminated veneers of ice and snow.  The alpine rock of New Hampshire has only a few forms – thin seams, unprotectable slab, splitter cracks, and choss. We were not the first to climb these rock routes in the winter – decades of scored rock surround prominent edges - the alpine climbers equivalent of chalked holds.  After a while I found myself standing on a ledge mid-pitch with one tool hammered into a thin seam by my chest looking below at an old piton well beneath my feet. It’s funny how a five foot section of unprotected low angle rock gives you pause when the only thing holding you to the mountain are a few millimeters of steel. In rock shoes it would just be forgettable filler climbing, but when you add the thought of falling with sharp spikes on each appendage it takes a little more mental power.  A few delicate maneuvers and pucker moves later we began the final romp to the garden.

After booting up the last snow slope we found the air to be still – not a single gust of wind in an area that would normally send a 250-pound person sailing. We were on the up and over program, and as we charged across the trail we were all smiles. A few hundred feet of horizontal ground beneath the summit cone, the Alpine Garden is full of garbage can sized rock cairns scattered across a scoured field in the clouds. The only things that survive up here in the winter are rocks, moss, and humans fully clad in Gore-Tex and puffy jackets. Trading crampons for skis we peered down the steep entrance to “Right Gully” in Tuckerman Ravine. We made a few classic icy east coast turns before opening up the throttle and racing a couple thousand feet of soft turns back to the car.

Full value days can be found anywhere, but I have to say, it’s pretty damn fun when they are in your backyard.

Equally at home in the laboratory or on the sharp end, Tyler splits his time between working as a geology researcher at Dartmouth College and guiding rock and ice climbing around the states.